ODIN Works, well-known Idaho manufacturer of every manner of AR part and accessory, entered the suppressor market in 2019 with two .30 cal cans and two 5.56 cans. At SHOT Show 2020 they released another pair of suppressors, this time both highly modular designs (first look HERE). The first to hit the market is […]

ATLANTA, GA – On this day, formerly known as Tax Day, we remember a time when Americans used to storm post offices across the country to send their taxes off to Uncle Sam. Tax Day might be postponed, but the American Suppressor Association is still hard at work!

At the American Suppressor Association, we believe that the National Firearms Act = Taxation Without Justification! That’s why, for years, we have led the charge to get rid of the unjustified tax.

Help us fight the Man by using some of your tax refund on a raffle ticket (or a hundred) to support ASA’s campaign to end the taxation of suppressors! Consider it an investment in a brighter future. And hey, you could win one of three incredible prizes in the process (all tax stamps included)!

1) Prize winners must be US citizens, at least 21 years of age, that have made one (1) or more qualifying entries by purchasing raffle ticket(s) during the eligibility period; or other qualifying entries as may be specified below.
2) All federal, state and local laws apply. Must be a resident of one of the 42 states that allow private ownership of suppressors to win suppressor prizes. Void where prohibited by law.
3) Firearms and suppressor prizes will be transferred through a federally licensed dealer in accordance with Federal law.
4) Suppressor winners must utilize a “Powered by Silencer Shop” affiliated dealer to receive their suppressor in order to have the $200 NFA Transfer Tax paid for by Silencer Shop.
5) Any transfer fees for firearms, suppressors, or other prizes imposed by the winner’s chosen dealer are the responsibility of the winner.
6) Prizes are not transferable and no substitutions, cash or otherwise, will be allowed.
7) Odds of winning will vary by the number of entries received.
8) Winners will be selected at random and will be contacted directly to claim a prize in the order selected. Eligible entrants will be assigned a ticket number or numbers based on their number of eligible entries. The numbers selected at random will determine the winners. The winner’s name/location will be published on the ASA’s website and on our social media pages (Facebook and Instagram).
9) If the winner fails to claim their prize within 72 hours of being notified, the prize is forfeited, and another winner will be selected. ASA is not responsible or liable for inability to contact winners due to incorrect contact information supplied or failure of winner to respond to communications, or ASA’s failure to receive such responses regardless of cause. ASA’s obligation is limited to making good faith efforts to contact winners.
10) Membership dues, entries, raffle tickets and donations to ASA are non-refundable once submitted. Any entries or donations paid in connection with this contest that is declined, rejected, returned for NSF, refunded, canceled, disputed or otherwise not made will result in removal of the member/entrants chances to win a prize.
11) The American Suppressor Association is a 501(c)(6) non-profit trade association. Donations, gifts and membership dues are not tax-deductible.
12) ASA makes no claim regarding the actual value of any prize and is not responsible for the accuracy of any value estimate provided by prize donors or anyone else. Manufacturers Suggested Retail Price listed for production items which may be purchasable for a lower amount. ASA does not guarantee the accuracy of the prize descriptions published. ASA makes no warranty as to merchantability, fitness for a particular purpose, suitability or condition of the prizes. Prizes subject to change without notice.
13) Privacy: ASA may share the names and email addresses of contest participants with partners and affiliate companies that are participating in this contest. Financial and/or physical address information will not be shared. Information collected by ASA may also be used for membership and other contacts or mailings and, in the case of winners, to contact winners and deliver prizes.
14) NO PURCHASE NECESSARY: To receive an eligible entry without purchase, send a letter containing name, address, telephone number and email address to American Suppressor Association, ATTN: April 2020 Raffle, 6085 Lake Forrest Drive, Suite 200A, Atlanta, GA 30328. All mailed requests must be received no later than Friday, April 24, 2020, 5:00 pm EST to be eligible. Limit one entry per household. The ASA is not liable for entries lost or not received. Due to legal restrictions, physical raffle tickets cannot be sent through the mail. Entrants will receive an email confirmation of entry.

About The American Suppressor Association

U.S.A. –-(Ammoland.com)- Silencer dealer, Silencer Central, of Sioux Falls, South Dakota, announced it is now officially licensed by the ATF in all 42 states where silencer use is legal. Silencer Central, unlike other dealers, sells silencers direct to the consumer, utilizing a unique digital/online business model that allows them to ship through captive business entities in all these 42 states. This means Silencer Central customers get their silencers shipped directly to their door!

Says Silencer Central founder, Brandon Maddox, “We very much appreciate ATF’s forward thinking and working with us to create the new guidelines that allow the application of today’s digital technology for the sale of silencers. This only serves to make the entire process far simpler for the consumer while maintaining the integrity of the system.”

Silencer Central attends hundreds of consumer shows around the country where shooting enthusiasts and hunters can see product and literally buy their silencer of choice on the spot. That silencer, once approved, ultimately is shipped to the customer’s door. Consumers can also shop and buy online at SilencerCentral.com. Once again, this is possible thanks to digital technologies such as DocuSign.

Silencer Central also offers a free NFA Gun Trust. Valued at $249, the trust makes NFA purchases faster and easier and allows their customer to add unlimited co-trustees. This means others (co-trustees) can also legally shoot using their silencer. It also ensures next generation inheritance of the silencer. Silencer Central, since their inception in 2005, has done over 25,000 NFA gun trust silencer transfers individualized and based on the customer’s state of residence. Their process ensures the gun trust paperwork is properly submitted and not rejected by the ATF.

Silencer use is growing at approximately 20% annually, a number that may, in fact, accelerate once more consumers know just how easy Silencer Central’s exclusive digital buying process really is. Gone is the confusion and the frustration previously associated with buying a silencer. Silencer Central’s customer service staff, a big part of their 75+ employees, is highly trained and always available to help. And, Silencer Central will keep a private record of your purchase making future purchases or trust changes even easier.

To learn more or to buy a silencer for your firearm, please visit SilencerCentral.com or contact customer service at 888-781-8778. Check out this video to find out more about Silencer Central.

Silencer Central was founded in 2005 in Sioux Falls, South Dakota with the goal of reaching the underserved hunting and sport shooting market by simplifying the silencer ownership process. For over 15 years, Silencer Central has grown their presence by attending major gun shows across the Midwest and now nation-wide. Silencer Central makes it simple to purchase a silencer by managing the entire buying process for the consumer and shipping directly to their front door, once approved.

The post Silencer Central now Licensed in all 42 States where Silencers are Legal appeared first on AmmoLand.com.

U.S.A. –-(Ammoland.com)- First and foremost, we at the American Suppressor Association hope that you and your families remain healthy and safe throughout the duration of the coronavirus pandemic. At this point, nearly every facet society has been disrupted for the near future. In the uncertain times that lie ahead, we must all do our part to stop or slow the spread of this virus.

That said, we at ASA remain committed to our job of protecting your right to purchase, possess, and transfer firearm suppressors. As the suppressor industry trade association, right now our top priority is ensuring that NFA applications continue to be processed.

For the past month, the American Suppressor Association has spoken with our contacts at ATF each week, receiving regular updates on NFA Division operations. We are pleased to report that the NFA Division is continuing to process and approve transfers of every type. Thankfully, unlike the complete government shutdown in early 2019, at this time we do not expect to see significant effects on transfer times based on NFA’s current operating procedures. 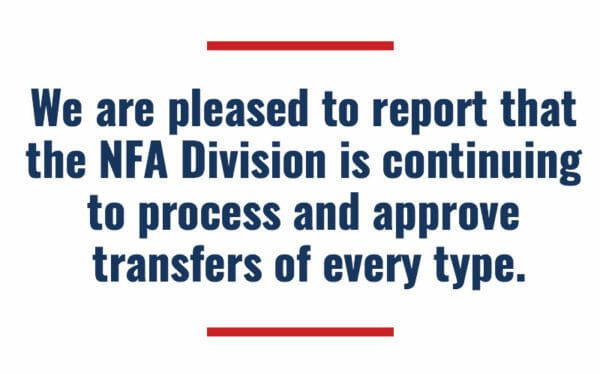 When we first spoke with ATF about coronavirus on March 13th, they informed us that they were developing a way to process NFA applications remotely. Thankfully, their planning has paid off as the overwhelming majority of NFA examiners and contractors are now working remotely.

While they remain able to process NFA applications, they do not have all their normal resources at their disposal. Because the examiners are now working remotely, their ability to respond to transfer status calls has been tremendously diminished. For this reason, we encourage you to refrain from calling NFA for status checks during this time. Doing so will waste precious time and resources that would otherwise be allocated to processing your form and the forms of thousands of other applicants in the same position as you. 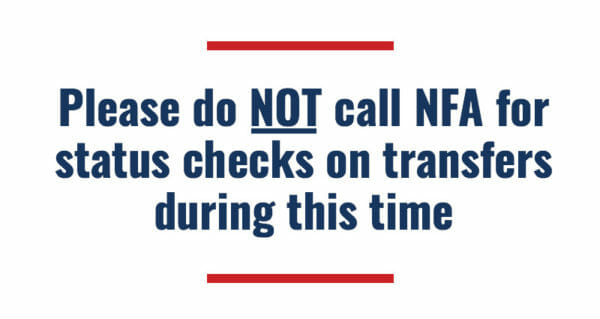 Make no mistake, we are not making excuses for the intolerable wait times that are brought on by ATFs antiquated process. However, to the extent possible, we need to do everything we can to remove any additional delays. Reducing the number of inquiries will allow NFA examiners to focus on approvals and limit any loss in processing efficiency caused by the need to work remotely. However, you *should* respond to any direct inquiry you receive from NFA, such as a request for missing documents or an error letter.

As always, we will keep our members informed of any changes as information becomes available.

Speaking of transfer times, it’s not too late to tell your elected officials to support Rep. Greg Steube’s (R-FL-17) H.R. 6126. The bill would cap suppressor transfers at 90 days, deeming any transfer application not already denied after 90 days to be approved by default. ASA supports this bill as a positive step toward ending excessive transfer times, and ultimately removing suppressors from the NFA transfer process. Visit our website and send an email to your Representative today!

About The American Suppressor Association